Microsoft announced the latest version of Surface device on their 2016 event on October 26. The device is called Surface Studio. Previously, Microsoft has launched Surface, Surface Pro, and Surface Book in convertible and laptop categories. The presence of Surface Studio has completed the Surface series. Surprisingly, the device has interesting hardware features and tempts the designers and architects to buy it. Through Surface Studio, Microsoft challenges Apple in all-in-one PC. Surface Studio from Microsoft versus iMac the Apple’s all-in-one desktop. What makes Surface Studio better than iMac? Or, vice versa. Let’s discuss it further to find out which one is better.

Surface Studio has a 28-inch display size with 10 fingers multitouch, and great responsivity, which makes it looks like a giant tablet. This multitouch input makes the OS interaction and apps richer. In this area, iMac will never beat it, because Apple keeps their decision that desktop isn’t a tablet. Windows Hello is a technology that allows the device recognizing your face when you try login to the system. iMac doesn’t have this technology. You have to type the password before login, or use Apple Watch if you have it. The device has a TPM chip for enterprise security and Enterprise-grade protection with Windows Hello face sign-in.

All the latest Surface devices come with Surface Pen which is included in the purchasing box. You don’t have to buy it separately, which is the case with Apple Pencil. With the pressure technology up to 1024 level, you can rely on Surface Pen for your artwork.

Surface Dial is the new accessory from Microsoft. It’s a tool that you can twist, both, physically or touch it to manipulate the interaction with an app. You can use this accessory wirelessly. It looks futuristic. Moreover, if you attach it to the Surface Studio’s display, the action menu will appear around it. It’s brilliant. Surface Dial is sold separately at $99.99. This is another fabulous feature you can find on Surface Studio. Zero gravity hinge allows you to move the 28-inch display weightlessly from an upright angle, down into Studio Mode and use only one hand. What a very useful innovation. 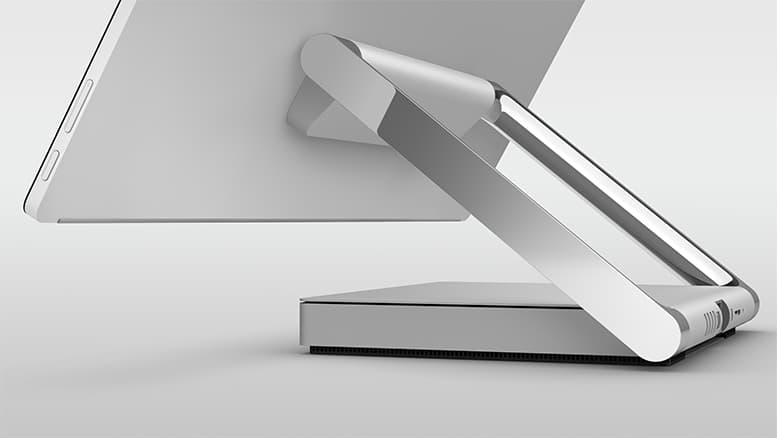 These are 5 things make Surface Studio more attractive than iMac 5K 27-inch from Apple. However, our discussion isn’t over yet. Now, let’s discuss why you should consider the iMac.

Surface Studio is sold starting from $2,999, with configuration: Core i5, memory 8GB, and GPU GeForce® GTX 965M 2GB GDDR5 memory. The lowest type of iMac is priced at $1,799. The configuration of this iMac is Core i5 with 8GB and GPU AMD Radeon R9 M380 graphic processor with 2GB of GDDR5. If we compare both devices, iMac is more affordable.

Microsoft claims that Pixelsense technology on Surface Studio gives the display a top-notch quality. However, iMac 27-inch 5K has a better display quality with 218 PPI, while Studio has only 192 PPI. At this point, retina display technology is better. For the other display quality, we are still waiting for further benchmark display. Surface Studio doesn’t have the Thunderbolt port. iMac has this kind of port for a quite long time. You can use this port to connect the device to the external display or HDD that provides the data transfer speed up to 20Gbit/s, which is 2x faster than the fastest USB 3.0. When it comes to design, iMac has a brilliant, elegant, and beautiful design by hiding all the components behind its display. It makes its design looks clean as if it’s just a single display. Different from Studio which places all CPU components in a box. You can order iMac with up to 3TB fusion drive configuration. It’s a technology from Apple that combines a conventional HDD with a flash storage for read write speed. At this moment, Surface Studio is only allowed to have up to 2TB configuration.

See also: Is It Worth Upgrading To The New MacBook Pro?