The long-rumored topic that Apple will release the new iPad with a bigger display, is finally revealed at Apple’s special event yesterday. Phil Schiller introduced the new iPad, the biggest news in iPad since iPad. The video intro of iPad Pro emphasizes to a great big display, multitouch and 3 mysterious pins connector. In another short video, Apple wanted to tell us that their new iPad Pro is a device designed to increase your productivity. let’s see the other potentials from this device.

New iPad Pro will be released this November, and here I am going to share some details about the device according to hands-on iPad, video, and the technology introduced on Yesterday’s Apple special event. iPad Pro came to complete the iPad series. At this moment, the iPad series consists of iPad mini as the base model, iPad Air as the mid Pro model, and iPad Pro as the top model. Why the iPad Pro is needed to complete the iPad series? In my opinion, there’s one answer to that, because the productivity, art and the other apps need a bigger screen. The bigger screen allows extra UI without disturbing contents of the application, and give a chance for developers to create the applications similar to the desktop apps. Apple believes that 12.9-inch is the right size for iPad Pro. The 12.9-inch display allows 2 full applications of iPad Air to come alongside on the iPad pro. Pro applications can come on iPad now. It is supported by a double performance of the GPU on A9X processor. It is claimed to have the performance 1.8 times better than A8X, the performance you can find in mid mobile PC segment. The fanless design and up to 10 hours of battery life are the other plus points. With all these things, iPad Pro can be a great option for professional people with high mobility. But, I wonder, why we couldn’t find the Apple application on the iPad Pro, which can optimize a big screen and A9X. From the announcement video we can only see Garageband with big layout and iMovie app with its capability to edit 4K video on iPad Pro. It would be fabulous if Apple could show Apple apps optimized for iPad Pro. It will encourage developers to follow. They are still using the old Home screen layout. It’s not effective and the distance between the apps too big. It gives the impression that iPad Pro does not have proper iOS.

I am afraid the strict rules and limitation of iOS making things difficult for the developers to create their pro app version for iPad. The users may only look at the iPod Pro as the iPad with a bigger screen, which is also faster. That’s it. It can bring the disadvantage for Apple and the iPad Pro itself as a new line up of the iPad. I also saw the Apple mistakes in their iPad Pro introduction video and teaser photo during the event, which only showed the photo, video, and game apps. I think, that was a wrong direction. The impression I got is that Apple wants to tell us their iPad Pro is great for watching movie and playing games. That’s all. Too bad. The fact is, you will not hold a 12.9-inch with 1.69 pounds for watching movies or playing games with the accelerometer for hours. These activities belong to iPad Air and iPad mini. Yes indeed, Apple showed the other pro apps, which became the highlight of their video, but again, all these apps can also be found on the iPad Air. What is so special then? Unfortunately, Apple didn’t introduce the third party apps in their demonstration on that event, such Microsoft Office, 3 new apps from Adobe, and more.

With the support of the keyboard that is connected to 3 magnetic pins, it couldn’t compete with the Microsoft Surface, and it’s not a productivity point anyway. You can find the similar Bluetooth keyboard in the iPad Air, and that’s enough. Apple couldn’t show the other advantages from their keyboard and 3 magnetic pins connector to connect to keyboard accessories. The thing that impressed me is their stylus: the Apple Pencil. The most waited stylus since the first iPad was launched for the first time. Apple can show us that this Apple Pencil is really useful with the sensitive to both tilt and pressure feature, natural sketch, and as the Internal battery. The weird thing is the way it charges. There is a lightning connector on the top edge of the pencil that you can plug to the iPad for charging it. In my opinion, it’s a weird design. Can you imagine, the Apple pencil will be perpendicular plugged into the iPad? That is not the ergonomic design. 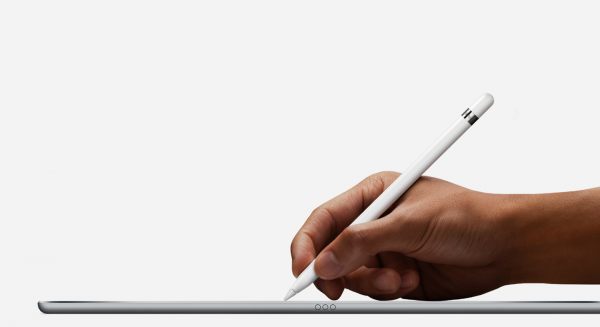 The other thing about the design: 4 speaker holes, which are placed on the sides of iPad Pro. There’s one time maybe you close one or two speaker holes when you hold the iPad Pro. However, this speaker technology gives the iPad Pro a plus point.

I believe, this is the initial iPad Pro from Apple, and they will fix it. The important thing from iPad Pro is its iOS, which is designed especially for iPad Pro. They have to change the home screen, default application to the device can become more “Pro”, not only for a bigger screen. The good support and cooperation with the pro company will be great to make the iPad Pro more useful, and not be used only for watching video, photo, and playing games.

iPad Pro is Available in 3 color options: silver, space gray, and gold, and has 3 models: 32GB W-Fi, 128GB Wi-Fi, and 128GB Wi-Fi+cellular. The iPad Pro 32GB Wi-Fi only model’s price is $799, which has difference for $300 with the base model of iPad Air 16GB. But is it worth? Yes, if wesee it from the technology and the double storage you get. By adding $300, you will get a bigger and more advance display, 16GB of bigger storage, and 2x better performance. It is worth. But, I think the 32GB is too small for iPad Pro, because you will not be able to store many data and pro applications with a big file size. I am waiting for the 3 magical magnetic pin connectors, whether this technology will support the external storage or not? If yes, we’ll probably see the additional keyboard+external storage on it. It will help the professional. For the top model of iPad Pro 128GB Wi-Fi+cellular, you have to spend $1079, which is more expensive than a base model of MacBook Air 13-inch, that is $999. Is it worth? Well, we will find the answer later after we can see many new pro applications, which are better than OS X on Mac.